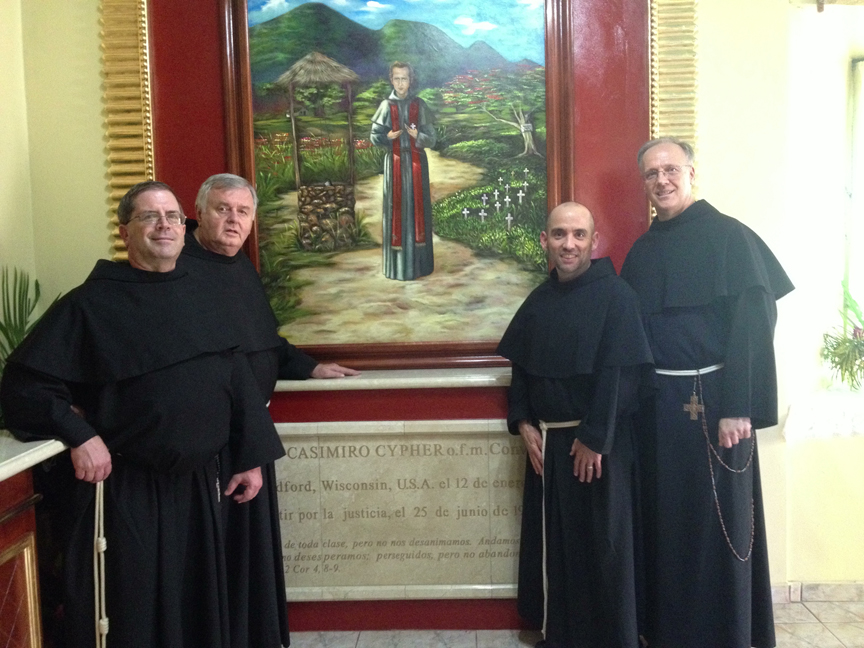 As you know, we are preparing to officially open the Cause for the Beatification and Canonization of Fr. Joe Walijewski, a priest of our Diocese who founded Santa Cruz Parish in Bolivia and Casa Hogar Juan Pablo II in Peru. Many people of our diocese have been to visit both places. Unfortunately, I never had the opportunity to meet “Padre Jose” as so many of you have.

Happily I am able to present another priest whose Cause is also being introduced at this time.  Fr. Casimir Cypher, a native of Medford, Wisconsin, was a Conventual Franciscan Friar, like me. I had the privilege of knowing “Fr. Cas” from my early days in high school, college, and theology. He was brutally and sadistically murdered in Honduras in June of 1975. He was the first of the martyred missionaries of Central America in those sad days of murdered Jesuit priests and Maryknoll and Ursurline Sisters, Lay volunteers, and even Archbishop Oscar Romeo.

This week, several friars from my Franciscan Province of Saint Bonaventure (Chicago Province), pictured above (L to R: Dcn. Paul Schneider, Fr. Luke Poczworowski, Fr. Al Lopez, and Very Rev. Patrick Greenough, Minister Provincial) went to visit Fr. Casimir’s tomb in Honduras. Fr. Casimir’s Cause is finally going to be opened—an event I have worked for and prayed for since his death was announced in 1975.

Saints are among us! Perhaps no one ever thought, while they talked with him or listened to his stories about South American children and their wretched poverty, that one day, Fr. Joe Walijewski would be considered a saint. Likewise, none of us who knew Fr. Casimir would think of such a thing. But they were different, weren’t they? Wasn’t it always fun to be around them—didn’t they bring a unique quality to our sense of being human? They seemed to be such fine people—not overly holy or pious—but just really good people.

In this Advent season, and in preparation for Christmas—the coming of God in the flesh—wouldn’t it be nice if things like that could be said about us? The Incarnation in action—Jesus, alive, active and recognizable in us? What a thought!