Well, I am happy to say that I have come to see the day that I can lay claim to an authentic “superhero.” Pope Francis has made his way to that legendary category today as is seen by this image of him displayed on the busy Borgo Pio just outside the walls of Vatican City. 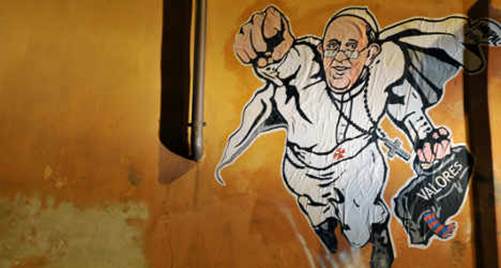 The Pope is depicted mid flight with his caparone flowing freely, his pectoral cross simulating rosary beads, while clutching his infamous black bag filled with “valores” or virtues. Making its distinct appearance is the scarf of the San Lorenzo de Almagro soccer (Euro football) team—the Pope’s favorite team. (Appropriate enough for Super Bowl weekend in the US.) The folks on the Borgo—a very busy tourist destination in Rome—seem to think that this piece of pop art is a keeper and many have already disputed the Roman authorities who seek to remove it. (Remove graffiti in Rome!?!)

Having one’s hero depicted in this way is not too strange, especially when you see all the pop culture depictions of our Holy Father from Time magazine to the latest (dubious distinction) onRolling Stone magazine. A “superhero” is someone who protects and defends truth and justice and basic human freedom. Armed with the virtues and the values of the Gospel, the Pope takes on the basic and evil elements that imprison and deceive minds and hearts and souls in our daily lives. As the Vicar of Christ on earth, we expect him to fight for truth and achieve Gospel values with the power of Jesus Himself.

I doubt he can fly, but I would not deny that he is a challenge to complacency and certainly a foil to the enemies of the Gospel! Long live the Pope!

Pray with him and for him at Sunday Mass.